Where the fords are

Have you met “The Galaxtang”? this one-of-a-kind vehicle started life as a beat-up 1966 Ford Galaxie 500. From a recently totaled 2006 Ford Mustang, we took the engine, dashboard, console, and the front seats and installed them in the Galaxy.

The Ford Galaxie was a full-sized car that was built in the United States of America by Ford for model years 1959 through to 1974. The name was used for the top models in Ford’s full-size range from 1958 until 1961, in a marketing attempt to appeal to the excitement surrounding the Space Race.

The Beach Ford Collision Repair staff did the installation and bodywork and created “The Galaxtang” you see in the photos below. It represents the true muscle car from a bygone era!

The Ford Fireworks lit up Downtown Detroit to cap a perfect summer evening for family fun. Celebrating 60 years, the Ford Fireworks featured more than 10,000 pyrotechnic effects that thrilled the hundreds of thousands of people gathered along the Detroit River.

If you can’t wait for 4th of July and want to see some fireworks in your wallet, you can get to Beach Ford today for our 4th of July Sales Event!

The all-new Ford Police Interceptor Utility hybrid responds to calls from law enforcement agencies for improved performance with lower operating costs to help make the lives of law enforcement officers easier with improved pursuit performance and standard all-wheel drive – and save agencies and taxpayers money. Its hybrid batteries are specially placed inside the vehicle so they do not compromise passenger or cargo space.

“We’re committed to electrifying vehicles for all customers, including law enforcement who need the high performance and low operating costs that Ford’s next-generation hybrids will excel at providing,” said Hau Thai-Tang, executive vice president of Product Development and Purchasing. “Standard all-wheel drive is important because crooks don’t stop when it rains.”

While fuel economy certification isn’t complete, the Police Interceptor Utility hybrid is expected to have a projected EPA-estimated combined label of at least 24 mpg – approximately 40 percent improvement over the current 3.7-liter V6.

If you applied these savings to every Ford Police Interceptor Utility sold in 2017, it would equate to more than $126 million at $2.93 a gallon, or more than 43 million gallons of fuel.

The new hybrid-powered Police Interceptor Utility also reduces engine idling time to save fuel when the vehicle is stationary. They hybrid can power demanding electrical loads from lights, computers, radios and other equipment using its lithium-ion hybrid battery, allowing the gasoline engine to shut off and intermittently run to charge the battery.

The Police Interceptor Utility hybrid is calibrated for law enforcement’s unique duty cycle. The utility automatically switches to maximum performance – with the engine and battery working at peak acceleration levels – when needed.

In addition to improved performance and no trade-offs in utility, cargo and passenger space, the Police Interceptor Utility features exclusive 75-mph rear impact protection for safety.

“With Ford Telematics, we’re helping our police customers unlock the data from their vehicles to provide them with more effective ways to manage their fleets and improve operations,” said Stephen Tyler, Ford Police Brand Marketing Manager.

The all-new Ford Police Interceptor hybrid will be built at Ford Chicago Assembly plant and up-fitted at Ford’s Chicago Modification Center. It goes on sale next summer.

It’s no secret that vehicle service and maintenance seldom make the list of top driving pleasures. So the last thing you want to happen is to get dragged into the garage over things you can avoid. Here are simple preventive care tips in dealing with six stealthy troublemakers so you can save time, money and grief.

To avoid this acidic etching, clean any bird droppings off of your vehicle as quickly as possible. A handy way to always be prepared is to keep a spray bottle of Motorcraft® Detail Wash (available for purchase at fordparts.com) and a soft cloth on board your vehicle to wipe away your troubles before damage occurs.

If you live by the coast, be warned: Sea salt spray and excess moisture will accelerate the corrosion process for metal. Be sure to clean off your car’s undercarriage and other metallic parts consistently. For good measure, use a rust inhibitor and cover your vehicle with a waterproof tarp.

Road salt will help prevent you from careening on slick ice in the winter, but it also can cause serious exterior corrosion if you don’t take preventive measures. Stop salt from eating away at your car’s undercarriage and body by cleaning your vehicle consistently and having it waxed and sealed by a professional.

The cold can stop you in your tracks in three ways: slowing your battery, thickening your car fluids and deflating your tires.

Battery: Your battery works when chemical reactions generate electrons to supply the current. These chemical reactions slow down in colder temperatures, sometimes causing the battery to stop functioning. To help prevent this from happening, have your battery checked for corrosion, aging and other damage (even if it seems to be working fine) at your local Ford Dealer Service Center where you can get it inspected as part of The WorksTM Package. Your battery could be near the end of its useful life and could leave you stranded soon. Always carry battery jumper cables to assist yourself and others.

Car Fluids: Check and maintain your vehicle’s coolant level to make sure your engine is running at the right operating temperature. Coolant serves the dual purpose of making sure your radiator fluid doesn’t freeze in cold and boil in heat. Make sure you use Motorcraft® coolant for the best results (available for purchase at fordparts.com).

Tire pressure: Every time the temperature drops by 10 degrees, tire pressure drops by 1 psi, so check and maintain your pressure more often in colder weather. Your dashboard may be equipped with Ford’s Tire Pressure Monitoring System that will let you know if any of your tires are significantly under-inflated.

Tire Grip: Tire performance suffers as temperatures dip below 45° F. While most all-season tires can handle light snow, they aren’t built for winter performance, especially if you’re located near the Snow Belt. Get some winter tires to keep safe and avoid the risk of losing traction. Created with more aggressive tread design, deeper sipes, and cold-temperature compounds, they will help you grip an icy or snowy road with confidence.

Sap, tannic acid and pollen from leaves can stain and damage your paint finish, especially if the leaves get wet. So make sure you brush off those maple leaves, fern fronds, and pine needles the next time you decide to park in the shade. Stains aren’t your only leaf worry. That beautiful fallen foliage can disguise road hazards such as potholes, soft verges and deep patches of water. Be sure to avoid parking over piles of leaves, as the hot muffler or catalytic converter could even cause these piles to ignite.

According to polling research, more than one in two car owners delay servicing. Postponing these critical checkups and repairs compromises vehicle safety and reliability, likely causing more serious and more expensive problems down the line. Regular maintenance will do wonders in extending your vehicle life and helping keep you and your loved ones safe. Make sure you service your battery, get your oil changed and have your brakes checked and replaced periodically or as use necessitates. Schedule an appointment at Beach Ford. 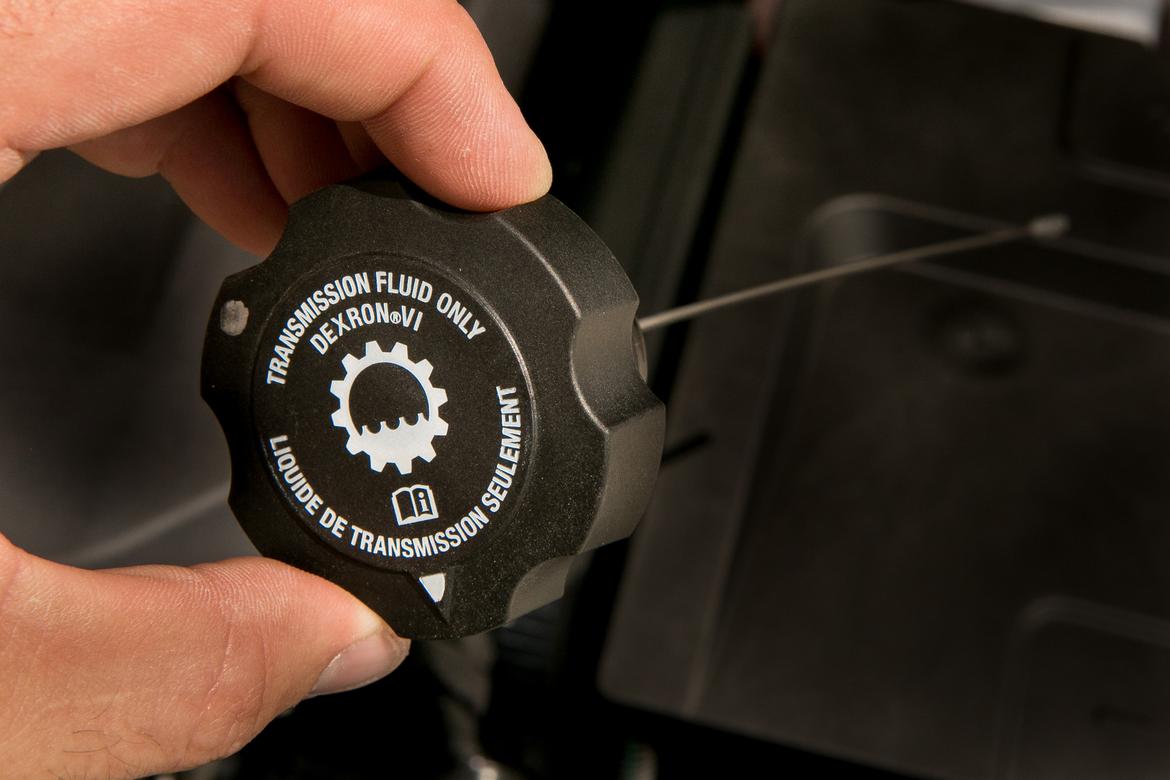 A transmission flush is a fairly lengthy procedure due for most cars around the 100,000-mile mark. Some newer Fords can last up to 130,000 or even 150,000 miles, check your owners manual for specific instructions regarding your vehicle. Inside your transmission, there is oil that keeps gears and moving parts moving smoothly; and after a certain amount of use, the oil needs to be changed.

Changing your transmission fluid at scheduled intervals can help maintain the life of your engine, improve or maintain gas mileage, and help with sluggish acceleration.

Because the process is so involved, and the maintenance is only done every 100,000 miles or more, the maintenance can e costly. And at some shops, you may pay as much as $150 for the service. But neglecting this car care step can hamper the performance of your vehicle and cost you more money and efficiency in the future.

If your car is nearing 100,000 miles of wear and tear, we recommend you take it to your local Beach Ford dealership in Virginia Beach or Borton Ford in Suffolk! You can schedule an appointment over the phone or online here!